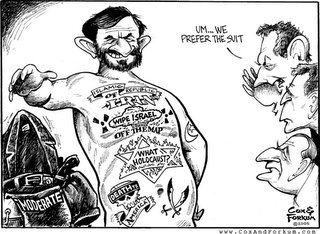 This is ridiculous: once again lunatic Iranian President Mahmoud Ahmadinejad went off the deep end, and once again the diplomat-speak of the Western world allowed him to maintain some dignity.

Ahmadinejad said the Holocaust is a myth.

The Holocaust is the most extensively documented systematic state-controlled mass slaughter in the history of the world.

Ahmadinejad is a liar.

But the Western diplomats refuse to denounce him in language that is appropriate.

German Foreign Minister Frank-Walter Steinmeier: "The recent remarks by the Iranian president ... are certainly shocking and unacceptable. I cannot deny that they may weigh on our bilateral relations and naturally also on the chances for the negotiations on (Iran's) so-called nuclear dossier."

European Commission spokeswoman Emma Udwin described the remarks as "completely unacceptable" because "such interventions will do nothing to rebuild confidence in Iran's intentions."

And even the Israelis acted like Frenchmen: "The combination of extremist ideology, a warped understanding of reality and nuclear weapons is a combination that no-one in the international community can accept," said Israeli foreign ministry spokesman Mark Regev.

I'm waiting for the day when the Western diplomats will be as forthright and direct as the fools they deal with in regimes such as Iran, No. Korea and Syria.
Posted by The Monk at 9:28 AM