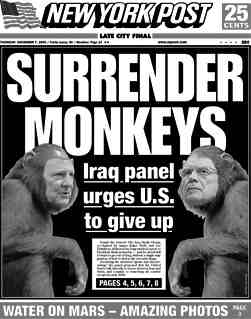 The Monk likes how the NY Post cut to the chase: labeling Lee Hamilton and the execrable James A. Baker III as "surrender monkeys".

As the story accompanying the priceless picture noted: "The Iraq Study Group report delivered to President Bush yesterday contains 79 separate recommendations - but not one that explains how American forces can defeat the terrorist insurgents, only ways to bring the troops home."

And of course Baker's appeasement heavy recommendations include extensive dialogue with Iran and Syria. Thankfully, the White House rejected the concept of talking with Iran during Tony Snow's comments to the media yesterday.
Posted by The Monk at 9:43 AM